The Special purpose state hunting ground Fazan Beltinci (LPN Fazan Beltinci) is situated on the Pomurje plains and covers the territory of some 15,167 hectares, of which 14,005 ha represent the hunting area.

In the area of the LPN Fazan Beltinci the fragmented structure of agricultural land is still partially preserved, which offers favorable living conditions for small game, especially pheasant, grey partridge and brown hare.

In the well-preserved large forests red deer and wild boar are permanently present, and roe deer is a very common game species.

Hunting ground as a landscape or habitat is profoundly influenced by the Mura river.

LPN Fazan Beltinci is located in the Pomurje plain, divided by the Mura River in the greater part on the left bank and the smaller part along the right bank, from Veržej to Razkrižje. 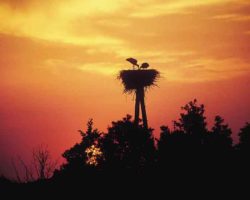 LPN Fazan Beltinci is a part of the Pomurje plains, home to the stork

The greater part of the hunting area on the left bank consists of fragmented cultivated areas intertwining with hedges and small isolated woods.

A smaller part of the hunting grounds along the Mura river consists of a relatively preserved floodplain with marshes, backwaters and river affluents.

The area of the LPN Fazan Beltinci in much of the hunting ground is characterized by favorable living conditions for small game; the most common are the pheasant, gray partridge and brown hare. 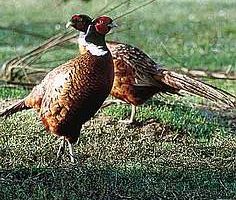 The Mura river with its backwaters and tributaries is an excellent habitat for many species of ducks, such as the Aythya genus, for example common pochard. Near watercourses different rare and endangered species appear, mostly otter, beaver, white-tailed eagle, osprey and the black stork. 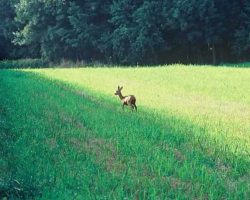 Landscape along the Mura river in the LPN Fazan Beltinci

The hunting ground is also engaged in the breeding and rearing of pheasants, grey partridges and mallards. Part of the reared small game is invested in the hunting ground, especially in spring, in April and May, and in late summer, in August and September. The second part of the reared small game is intended for sale at domestic and foreign markets, in particular within the EU.

The LPN Fazan Beltinci is known mainly for its good organization of hunting small game, we organize the hunting of pheasant, brown hare and, as a specialty, also the hunting of grey partridge. 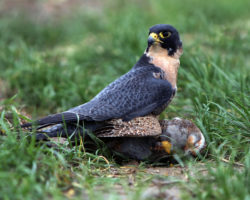 Falconry in the LPN Fazan Peskovci

Many hunting guests enjoy the combined hunting of pheasant, brown hare and grey partridge. This method of hunting is by far more difficult than hunting pheasants, but offers more hunting pleasure. The best time is from the second half of September to the end of October, when grey partridges have enough cover to hide from hunters. 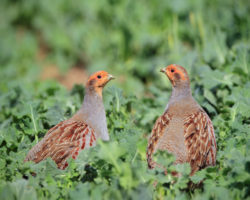 The hunting exclusively of pheasants is only carried out in the slightly more overgrown areas of the hunting area. We organize it according to the wishes of hunting guests, either with short hunt outs and stand hunting, by culling high-flying pheasants, or with the help of retrievers, where hunters shoot pheasants which are then retrieved by dogs. This type of hunting is a bit more difficult and yields less prey than with stand hunting. Best month for hunting pheasant is from late October to mid-January.

The hunting of brown hare is carried out with the help of pointers in the fields or in the woods, also in combination with hunting grey partridge or pheasant.

The most appropriate time for hunting mallard is the first week of September, when we also organize the hunting exclusively of mallard. With this hunting method dogs retrieve ducks from water surface overgrown with reeds. In October and subsequent months exclusive mallard hunting is no longer organized, but is rather combined with the hunting of other species of game.

In the autumn, it is possible to hunt roe deer and fawn.

Red deer hunting is possible by prior arrangement.