The area of the LPN extends from western Karavanke along Kamnik-Savinja Alps toward the Logar Valley and comprises 42,699 hectares.

The Special purpose state hunting ground Kozorog Kamnik (LPN Kozorog Kamnik) is one of the biggest hunting grounds in Slovenia. The area of the LPN extends from the western Karavanke and along the Kamnik-Savinja Alps toward the Logar Valley, altogether comprising 42,699 hectares.

The most important game species in the hunting ground are the chamois, alpine ibex, roe deer, red deer, mouflon and wild boar.

The LPN is situated within an area with the best preserved habitats of highland and mountains, and represents the very peak of the European preserved natural heritage considering its biodiversity. 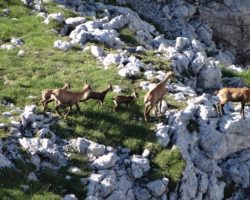 The hunting ground is divided into 13 hunting districts. Each district has its own professional district hunter.

Chamois on mountain tops in the LPN Kozorog Kamnik 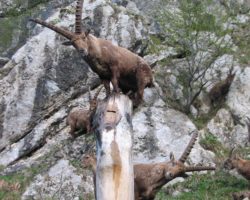 The most important type of game in the hunting ground are chamois that quality-wise belong to the European top. 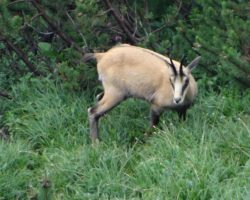 Chamois at the mountain meadow in the LPN Kamnik Kozorog

Chamois, rutting male in its winter outfit in the LPN Kozorog Kamnik 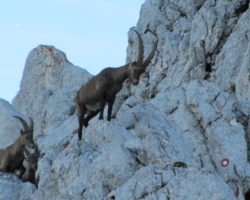 The characteristic of the hunting grounds is also a viable population of mature alpine ibex and great trophy specimens.

In the spring months, visitors can also hear the black grouse calling.

Within the hunting ground we perform traditional hunting, which is solely intended for real hunters. By listening and observing wildlife in its natural environment we offer genuine contact with nature. In the subalpine region and the Alps this is a special experience, as in the middle of pristine nature you can enjoy listening to a variety of birds singing, the murmur of a mountain stream and tempting fragrances of mountain flowers. 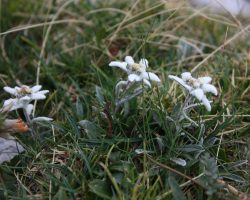 Edelweiss in the LPN Kozorog Kamnik

The specialty of hunting in the LPN Kozorog Kamnik is the hunting of chamois in the idyllic Alpine environment. We can organize it irrespective of the physical condition of the hunting guest, as the latter can hunt chamois both in the medium mountain region and the high mountain range, of course, only within the period of chamois hunting, which extends from the beginning of August to the end of December.

The most common types of hunting are stalking and stand hunting from a high seat.

The hunting ground is divided into 13 districts where the work is carried out by professional district hunters.

Hunting guests, who come to visit us, need to be equipped for hunting in the medium mountain region and the high mountain range. Therefore, you will need robust footwear, appropriate clothing, a stick, proper physical fitness, a rifle which according to your needs can be calibrated before the hunt begins, and a backpack, as well as a steady hand and a good eyesight.

In the LPN Kozorog Kamnik regular monitoring of various types of game and certain protected species (golden eagle, black grouse …) is carried out.

In the hunting ground we are involved in the planning and implementation of numerous projects, and also perform other public functions in the field of game and hunting.

In the LPN Kozorog Kamnik regular monitoring of various types of game and certain protected species (golden eagle, black grouse …) is carried out.

In the hunting ground we are involved in the planning and implementation of numerous projects, and also perform other public functions in the field of game and hunting. 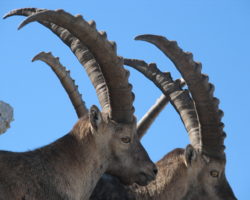 Big population of alpine ibex in the LPN Kozorog Kamnik

A trophy belongs to every hunting guest who shoots game. Depending on the customer’s wishes the district hunter prepares it for transportation. Prior to this the trophy is assessed under current CIC forms for evaluating trophies. If the hunting guest desires a taxidermy specimen of the hunted animal we provide him/her with an adequate conservator.

In the event that the customer is not from the EU, we will provide him/her in the shortest possible time with the necessary export documents. Upon completion of the statutory veterinary procedures it is also possible to purchase the meat of the hunted game.

The trophy estimated in accordance with the applicable CIC forms, together with the rendered services of management and organization of hunting, founds the basis for calculating and issuing an invoice under the valid Price list of the LPN managed by Slovenia Forest Service.

Many hunting guests are very active, therefore, in addition to hunting they also want to explore the surrounding of the hunting grounds and Slovenia as a tourist destination. That is why the LPN Kozorog Kamnik in agreement with the local tourist organization offers organized sightseeing visits to other attractions throughout the country. Slovenia was in recent decades increasingly recognized as a green, active and interesting destination, with a rich offer of cultural and natural sites, where it is possible to spend a quality holiday with the whole family.