The Special purpose state hunting area Pohorje (LPN Pohorje) is located in the central part of Pohorje, covering 27,500 hectares, with an altitude difference of almost 900 m between the highest and lowest point. The highest peak is Črni vrh (1543m).

The most important game species are chamois, red deer, roe deer and wild boar. In the area of the LPN Pohorje there are also a number of protected species, most notably the capercaillie and black grouse.

LPN Pohorje is situated in the Pohorje mountain range in northeastern Slovenia near the border with Austria.

Hunting lodge in the LPN Pohorje

Pohorje is among the best preserved natural areas in Slovenia and Central Europe. The entire area of Pohorje is endowed with water, creating peat bogs and small lakes. 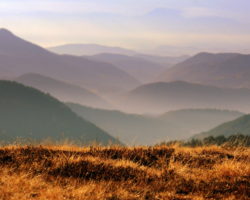 Mountainous character of the LPN Pohorje

The diversity of mountains and the harsh climate required of the people an extraordinary sensitivity toward nature, harmony between man and nature, which is still reflected in the well-kept pastures, forests and the mighty farms. Also, caring for nature is one of the reasons why living conditions there are still favorable for the existence and development of many game species.

With its geological substratum, position between the Alpine and sub-alpine region, characteristic cultural landscape and high forest cover the LPN Pohorje represents an important habitat for numerous wildlife species, both game and protected species. 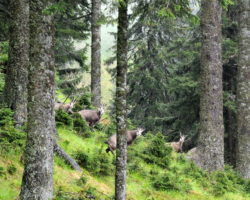 Herd of chamois in the LPN Pohorje

The most important game species include the chamois, red deer and roe deer.

Red deer and other wild animals were significantly influenced by the coexistence of man and nature, with various springs to be discovered at each step.

Favourable living conditions for wildlife and successful game management are the result of professional work with forests, nature-friendly ways of working the farmland and respectful attitude towards the game.

Herd of chamois which in the LPN Pohorje stays below the treeline. 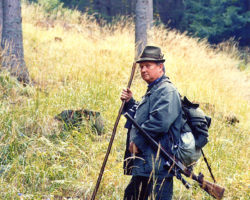 Hunter prepared for hunting in the LPN Pohorje.

Hunting guests like to return to the LPN Pohorje to hunt red deer and roe deer during the rutting season.

In the LPN Pohorje traditional hunting is performed, mostly by stalking and stand hunting.

In the Močnik hunting ground, the south-eastern part of Pohorje, the most interesting is the hunting of roe deer and red deer. The landscape here consists of meadows, pastures and forests.

The Rakovec hunting ground offers a special view of the near and distant surroundings. In the hounting ground the hunting of all kinds of game is carried out.

The Komisja hunting ground consists of vast forests that provide contact with primeval nature and enable an exceptional experience of hunting chamois.

The Hudi kot hunting ground consists of pine forests that enliven the hunting of chamois with a meeting with black grouse and capercaillie.

Activities of the LPN Pohorje include not only the sustainable management of wildlife and its habitat, but especially the protection of wild animals.

Regular monitoring of various types of game and certain protected species is carried out in the LPN Pohorje.

LPN Pohorje is involved in the planning and implementation of numerous projects and other public functions in the field of game and hunting.