The Special purpose state hunting grounds Kompas Peskovci (LPN Kompas Peskovci) is located in the far north-east of Slovenia and covers some 12,538 hectares. It extends at an altitude of 230 m to 404 m.

Great pride of the hunting ground is the East European red deer (Cervidae pannoniensis), which according to historical sources represents the only part of the native population of red deer in Slovenia that did not become extinct already in the 19th century.

Due to the current needs, LPN Kompas Peskovci has concluded cooperation arrangements with domestic hunters organized in societies.

LPN Kompas Peskovci is situated in Prekmurje, on the very border with Hungary in the Goričko region. Pannonian landscape mostly consists of undulating hills with predominantly agricultural land.

Due to the abandonment of agricultural land the proportion of forests rose above half, which means a great length of forest edge and thus unwanted access of ungulates to farmland.

LPN Kompas Peskovci is adjacent to the Hungarian Vas County and the area of the Hungarian state forests, which means there is more than 30 km of territory that enables a smooth transition of ungulates from Slovenia to Hungary, and vice versa.

The LPN Kompas Peskovci hunting ground is divided into four hunting districts: Boreča, Hodoš, Domanjševci and Markovci. Work and keeping guests in these hunting districts is caried out by professional hunters. 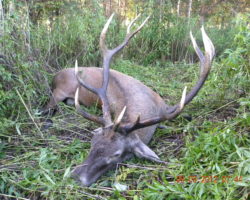 The hunted deer in the LPN Kompas Peskovci

In the past the LPN Kompas Peskovci was specialized and best known for hunting small game. By today the situation has changed, therefore, they offer a combination of hunting of all species of ungulates and small game living there. 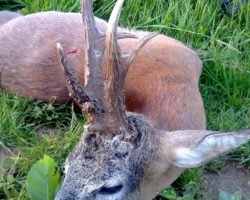 The roe deer hunted in the LPN Kompas Peskovci

Hunting for wild boar is successful throughout the year. The most common way of hunting boar is stand hunting, but during the winter they also organize hunting in group by hunt out.

Mature roe deer hunting is carried out in May, it is also very successful during the rutting season.

Hunting East European red deer represents the peak of the rutting season. Lowland hunting grounds and easy access to all parts of the hunting grounds allow for hunting red deer irrespective of the physical fitness of hunting guests.

Hunting for pheasant and grey partridge is organized in the autumn and winter. At specially selected sites the hunting of the high-flying pheasant is carried out, and on the slightly sloping, open areas it is also possible to hunt grey partridge.

Some hunters complete the hunting of small game with the evening waiting for trophy or non-trophy ungulates.

The tradition of hunting in Slovenia is not only associated with culling, but with the sustainable management of game and its habitat. This is also true in the LPN Kompas Peskovci.

The LPN Kompas Peskovci can boast with the only viable preserved otter population in Slovenia.

The fallow deer hunted in the LPN Kompas Peskovci