Hunting chamois during the “rutting” season

Hunting chamois during the rutting season is carried out in the special purpose state hunting grounds from mid-November to mid-December. During this time, the female is only fertile for two days, and if a male chamois fails to inseminate it, it becomes fertile again only three weeks later. Hunting of chamois during the rutting season usually takes place during the second mating period, when most of the females are already inseminated.

Hunting guest may choose to hunt chamois with a combination of stalking and stand hunting. This means that the hunting guest stalks chamois together with a professional hunter, moving through the hunting ground, and when they find the location of a herd of goats with offspring, they continue with stand hunt. Sometimes the hunter, after noticing a properanimal, also helps his/her chances by imitating chamois’ movement during the rutting season. Since the chamois during that time are very curious and attentive to potential competitors they may get very close to the hunting guest or his companion. 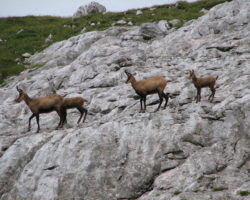 Chamois on the rocks in the LPN Kozorog Kamnik

The hunting of chamois is carried out in in the special purpose state hunting grounds in LPN Kozorog Kamnik, LPN Pohorje, and LPN Prodi Razor. In the LPN Kozorog Kamnik chamois hunting is taking place above and below the alpine treeline, in the population which is considered one of the biggest in this part of Europe. In the LPN Pohorje chamois hunting is carried out below the treeline of the mountainous world, with numerous springs, streams and lakes. In the LPN Prodi Razor chamois hunting takes place in the High Karst Unit with typical slopes. Nature in all landscapes is among the best preserved in Slovenia. Hunting guests may choose to hunt in the landscape which is closest to them, depending on their physical condition and the equipment available.

Chamois climbing the rocky slopes in the LPN Kozorog Kamnik

Hunting is performed by professional hunters who know the movements of chamois in the hunting grounds.