The most important game species are chamois, mouflon, wild boar, roe deer and red deer. Within the LPN there are also certain other interesting species of wild animals, among which the most interesting is certainly the statutorily protected black grouse, in addition also rock ptarmigan and rock partridge.

The whole area of the LPN Prodi Razor is a great quiet zone, where the game is minimally disturbed. Among the rare and endangered species in the hunting ground one can also find brown bear and golden eagle.

The territory of the LPN is very diverse. The northern part lies within the actual Alpine terrain characterized by mountain ridges with two-thousand-meter peaks, steep cliffs and steep mountain meadows. The highest peak is the Tolminski Kuk (2086 m).

Even the eastern part of the LPN, where the compact dwarf pine turns into mountain beech forest, is full of steep and deep ravines with a landscape transformed by glaciers. Here too, the flat ground is very scarse. The lowest point of the hunting area is at the confluence of the rivers Liščak and Kneža (274 m).

In addition to the ridges, rock faces and steep mountain pastures in the northwest, and the steep and deep ravines in the east of the hunting grounds, the main peculiarities include an actual Karst field with characteristic Karst phenomena in the area of Tolminski Migovec (1881 m). The abysses of the karst fields are researched by cavers. From the ethnological point of view, the still lively Razor mountain is especially interesting. The special, distinctive appearance and dynamics of the mountains and the landscape is the result of meadows being cultivated by people from the nearby farms.

The core area of the Prodi is a gable of the Kneža valley transformed by glacier activity. The entire area is mountainous. Slopes, which are the most typical landscape feature within the hunting ground, especially stand out under Tisovec, in Lasejne, Jeseničje, behind Masovnik, in Črti, Gradnik and bellow Ploha. 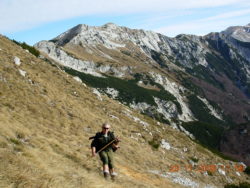 The upper, mountainous part of the hunting ground

The northern boundary of the LPN runs along the ridge of the Tolminski Kuk (2086 m), via Podrta gora (2061 m), Škrbina (2054 m), Meja and Rušnati vrh, over the mountain pass Globoko, over Vrh krnic toward Vogel (1922 m). From here, a mountain ridge branches off to the south towards Žabijski Kuk (1844 m). This ridge represents the border between the hunting grounds Prodi and Razor. Along the main ridge from Vogel we cross the mountain pass Vrata to Vrh dlani (1754 m) and from there over Šija (1880 m) across the mountain pass Suho toward Rodica (1966 m).

The most important part of the game consists of populations of chamois, mouflon, roe deer, wild boar and red deer.

In the spring months, visitors can hear the black grouse calling.

In the hunting ground we perform traditional hunting on mountain ridges and the steep and deep mountainous ravines. Hunting is intended for true hunters, because by staying in hunting lodges, observing wildlife in its natural environment for several days and through evening gatherings we offer genuine contact with nature. In the High Karst Unit, this is still a special experience.

The most common way of hunting is stalking and stand hunting from a high seat. Hunting is carried out also up to 9 hours per day, during the summer months especially in the morning and evening, while in the winter often all day long.

Specialty of hunting in the LPN Prodi Razor hunting ground is that the entire hunting ground represents a large quiet zone. Therefore, game is minimally disturbed within the area of the hunting grounds. Hunting is organized in such a way that the game in certain areas is disturbed only once a week at the most.

At three feeding points within the hunting ground, we use feed to attract animals, there are also many well-maintained lookouts and hunting trails.

Hunting guests who will visit the LPN Prodi Razor should be in a good physical condition and have the equipment for hunting in the mountains.

In the hunting ground we offer genuine experience of nature in the High Karst Unit, through accommodation in three hunting lodges, fully equipped with everything necessary for hunting. The first two are situated at Prodi, and the third stands on the Razor mountain. 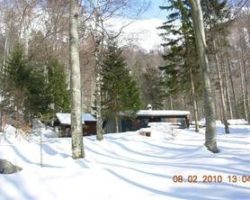 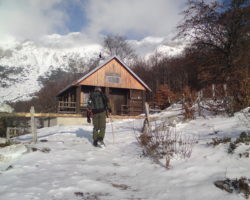 The result of a rational management of hunting grounds are also top trophies.